The visual novel deluge shows no signs of stopping although at least A Hero and a Garden is more of a clicker than a choose your own adventure. Coming from npckc, this knight’s story features some green thumb gardening and some charming life lessons. Simple in its approach, there’s a focused effort that wants to tell a narrative whilst giving the player some basic orders to fulfil. 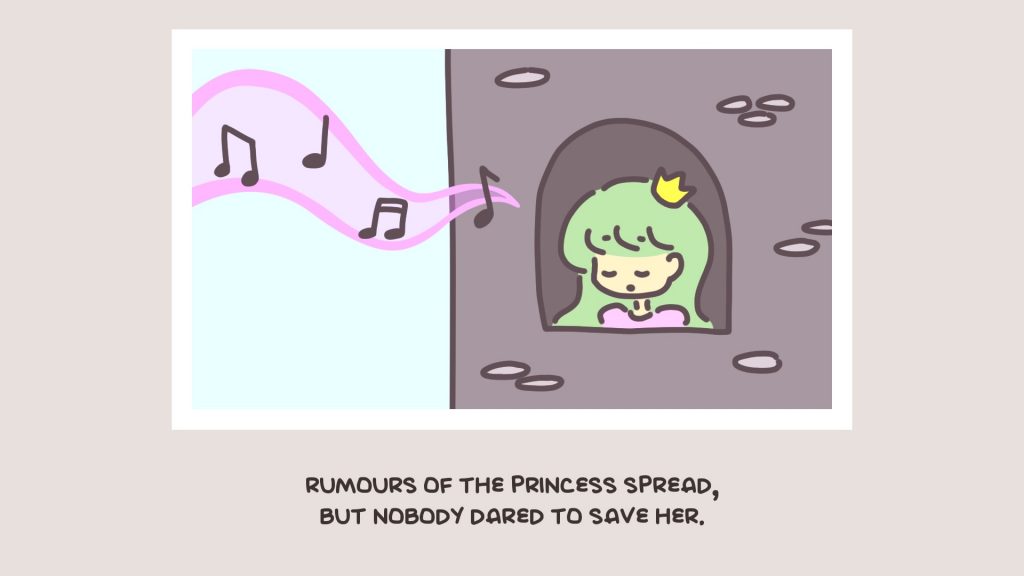 A Hero and a Garden‘s story is a nice tale about responsibility and friendship. Cyrus is a Knight who unfortunately causes untold criminal damage in pursuit of his Princess. He’s apprehended and given a garden to take care of until his debts are all paid. He’s in a town of monsters but it soon becomes clear Cyrus has a lot to learn about the people he’s trying to protect.

It’s written fairly well with a playful tone and an interesting cast of characters. Monsters visit you regularly and it presents a chance to really get to know them. They have their own stories to tell and each one wraps up in a neat little bow. There’s some humour thrown in and everything is kept very light. It’s very inoffensive and has heart to it. 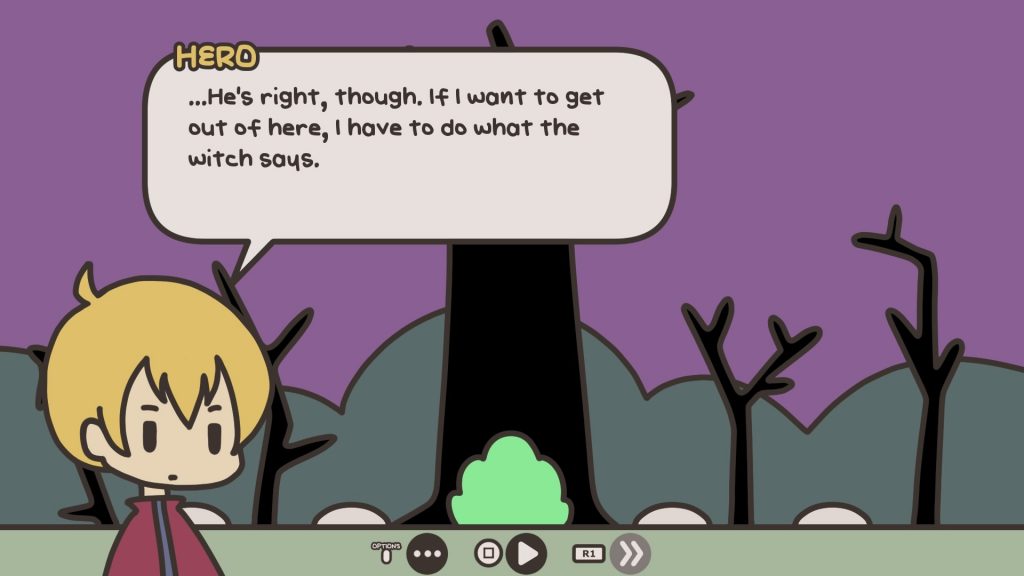 It’s surprisingly engaging as you learn more about your customers and their relationships. Their stories are all nicely contained and are interesting to read. Hearing about their lives and motivations gives colour to the town Cyrus has damaged. You find out about Cyrus too and his interactions often shed light on why he acts the way he does.

The gardening of A Hero and a Garden takes on a very simplified form. You have a series of bushes that grow different berries. They grow constantly so your priorities are on gathering the berries and fulfilling orders from the townsfolk. Successful orders bring you money which, in turn, pays off the damages Cyrus brought to the town.

It’s a clicker so the gameplay is very low-effort and relaxed. All you need to collect berries is a button press. When you have a full garden, there can be a rhythm to it as each bush grows at differing rates. It’s not especially involved but I did find myself focusing on the numbers and seeing what orders were coming in. You do have an automated helper at your disposal but you can only command them to pick from a single plant. You can’t speed them up, hire more help or upgrade their effectiveness. Compared to the work a player can put in, the helper is not particularly productive. 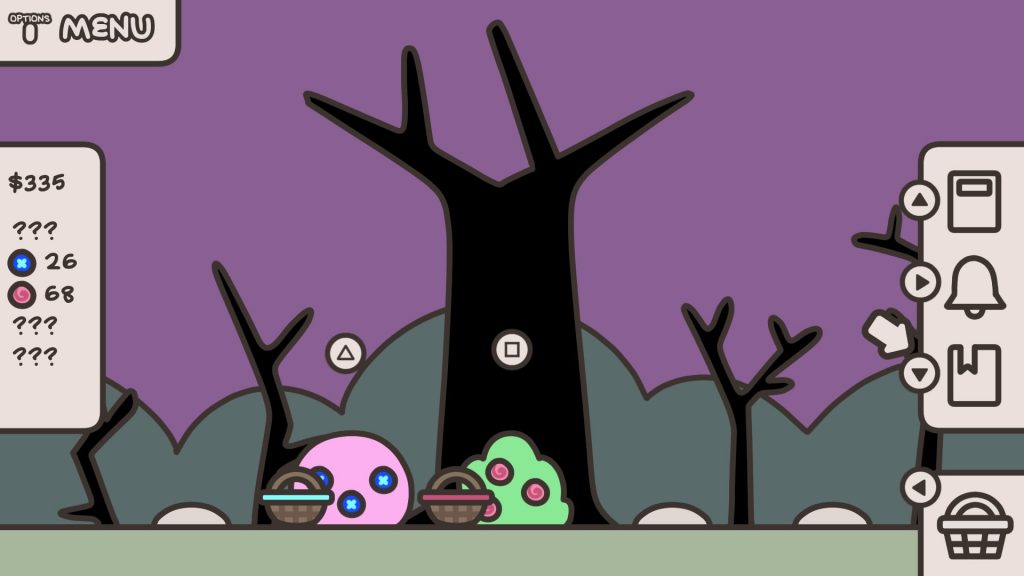 Your gardening is broken up by monsters demanding new orders of berries. It allows Cyrus the chance to play a sympathetic ear and find out more about the townsfolk. A lot of their chatter has a focus and a point with very little of it feeling superfluous. It’s all fairly twee and a lot of it seems to be in service of Cyrus learning some life lessons. Compared to the gardening, it lacks interactivity but switching between storefront and garden allows the narrative to be neatly framed.

It results in something that’s paced well. Your orders aren’t too time consuming and you are usually tackling two or more at a time. Once the orders are done, there’s no reason to keep collecting the excess produce. It remains fairly basic, even by clicker standards. You can replay the story for the remaining endings but the moment where the story branches appears very late in the day. The character work is good but I didn’t find it strong enough to revisit for more closure.

There’s no pressure to it. You’re not against the clock and the berries stop growing when you’re visiting the storefront. The display calls your attention to it when a new order comes in or a repair bill has been met. These give you a great idea of how your task is progressing without needing to give it your fullest attention. 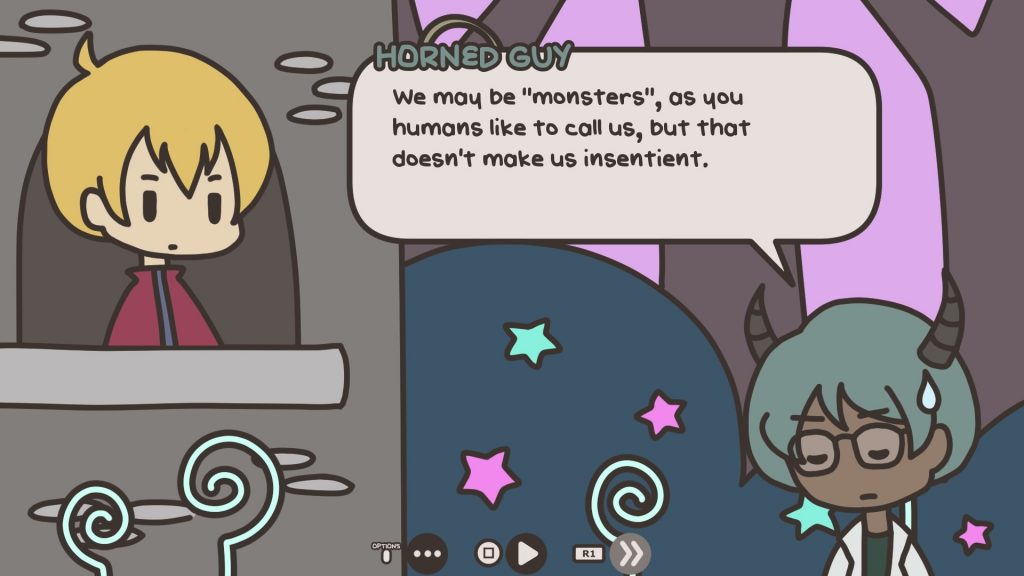 The visual style is very quaint. The artwork is colourful, simple and childlike. It’s all very static but the character designs have a charm to them that’s hard not to like. Your garden looks barren to begin with but the new bushes populate it with some basic, colourful shapes that give it some life. It strikes me as something fairly functional and uncomplicated in its approach.

It’s simple with some charming writing and I found A Hero and a Garden to be an enjoyable, low energy time. The gardening gives you something to focus on without being too taxing. It’s not especially big or clever but there’s a lovely heart at the centre of this. The helper’s effectiveness could’ve been better but the hands on approach of the gardening at least gives you something to focus on.

A Hero and a Garden
6 Overall
Pros
+ Simple, twee visuals.
+ A surprisingly well-written story with interesting characters.
+ Nicely structured to allow for a measured pace.
+ Gardening gives you something light to focus on.
Cons
- The helper doesn't speed up the gardening sections.
- Replaying this for the other endings could present a grind.
- The simplicity on offer might be too much for some.

Summary
A Hero and a Garden is a charming tale about responsibility and friendship. The narrative is well told with some interesting characters to chat to. The gameplay keeps things fairly simple and at least gives you something to focus and interact with. There's nothing too complex and the gardening doesn't consume too much time. I like it but it's a short and sweet effort that doesn't really entice me to play it again.