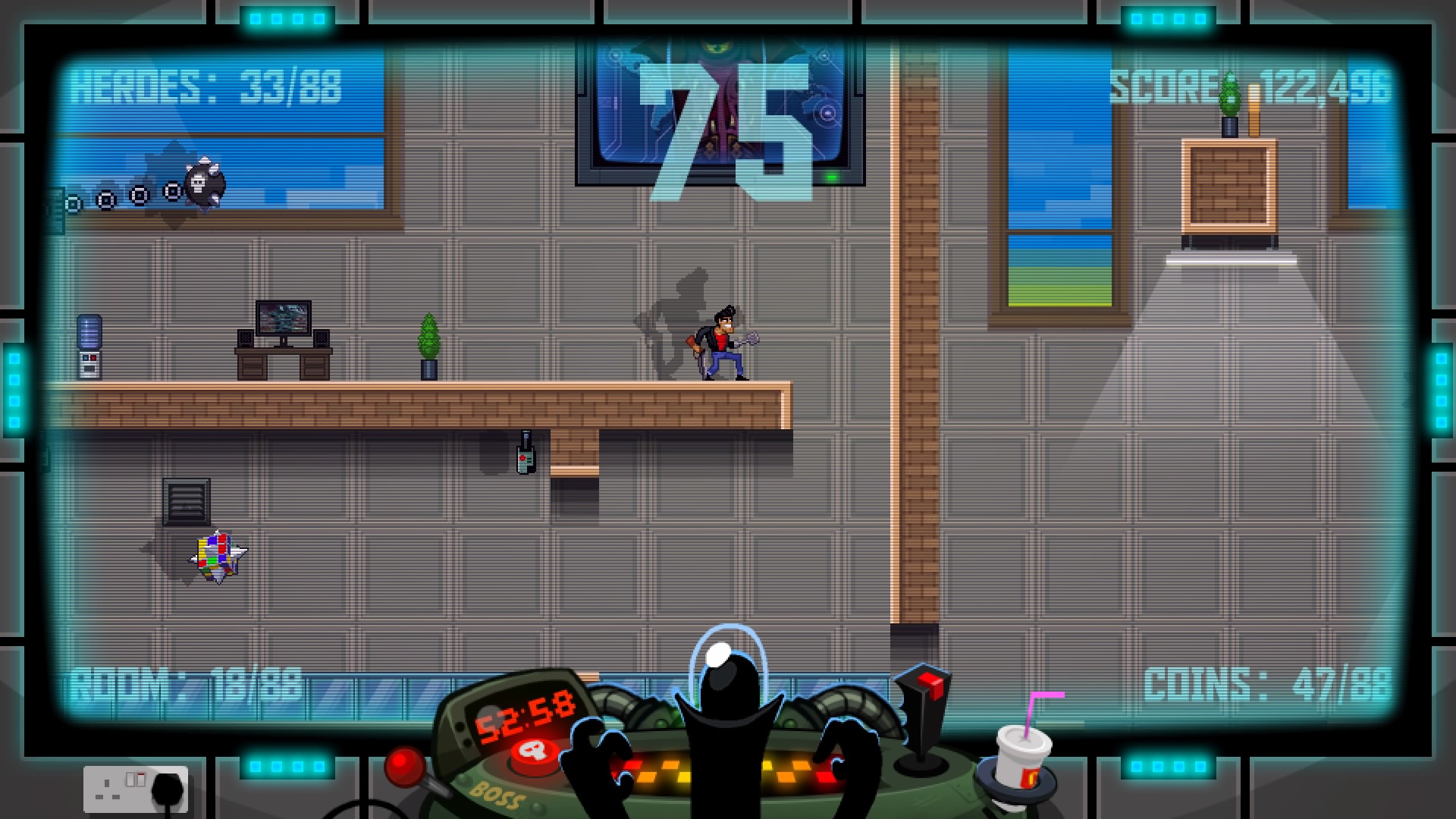 88 Heroes has a gimmick. The plot sets it up – it’s 8:08 AM on August 8, 1988, and the evil Dr. H8 has brought the world to the brink of total annihilation. His demands are simple: pay $88 octillion within 88 minutes, or Dr. H8’s 88 thermo-nuclear warheads will wipe out the Earth. This game is about eights and it sticks to it through thick and thin.

Essentially a platform game with some combat, the game tasks you with getting through 88 levels with 88 heroes. The levels are relatively short and the heroes are assigned to you randomly, if you complete a level you get to keep hold of the hero you beat it with for use later on but if you die, that hero is lost and you’ve effectively lost one of your 88 lives. 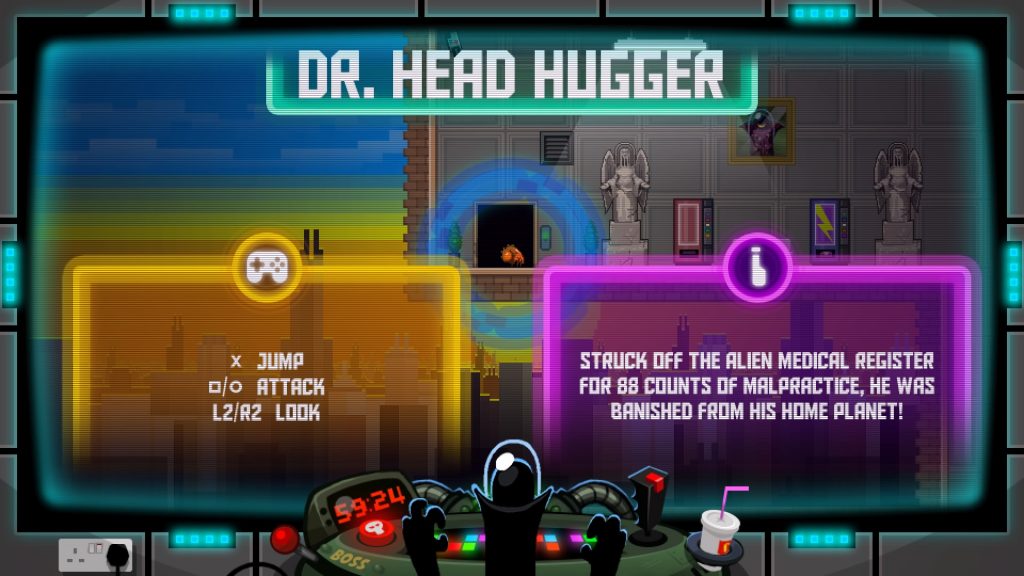 What makes the game interesting is that each hero is different. From their size, speed and inertia to their abilities or lack of. Some characters have useful abilities such as double jumps or weapons while others have no abilites or, worse, aren’t really useful at all. For example, one hero is just a bouncing ball that you rotate. It’s not set up for this kind of platforming at all but you’ll lose them pretty quickly and will be onto the next one.

So while the gameplay most closely resembles that of Mercenary Kings on the PS4, it also evokes memories of Wario Ware as you really have to grasp the new gameplay mechanics quickly and execute that level without any real preparation.

On the plus side, this is all tremendous fun. Getting a new hero every time is fun (and their bios are amusing to read too) and the short levels provide a lot of challenge without too much tedious exploring. Add to that the game’s sense of humour and retro stylings and at first it’s all very enjoyable. 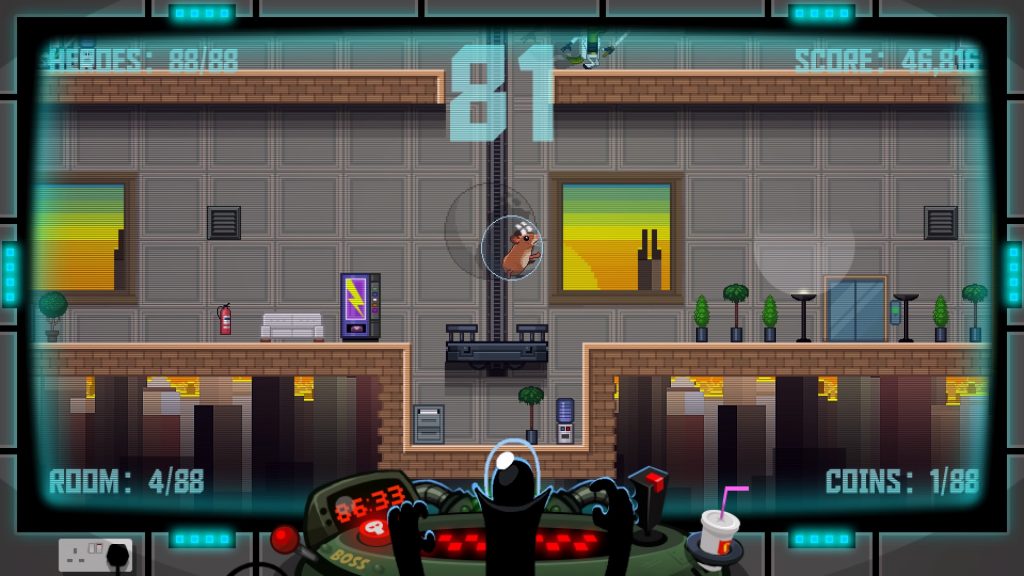 The thing is, those 88 heroes will carry you a long way and after a while it all starts to drag a bit. Although the heroes can vary quite a lot, there are also lots of similar characters in there too and what should be a bit more of a bite-sized hit of action is suddenly dragging out for the best part of an hour.

Also, as expected, some of the levels can be absolute pigs with death sometimes being a little too sudden. You can scroll the camera around but you generally won’t because time (88 seconds) is a factor on each screen.  So, deaths can be pretty cheap sometime. This can lead to frustration for sure and further takes the shine off of the game.

That said, the game does save your progress so it’s not like you have to do it all in one sitting. Also, the game does let you retry when you lose your final character so getting through the game is possible without needing silly levels of skill (the rarest trophies are a fair bit harder to obtain though). 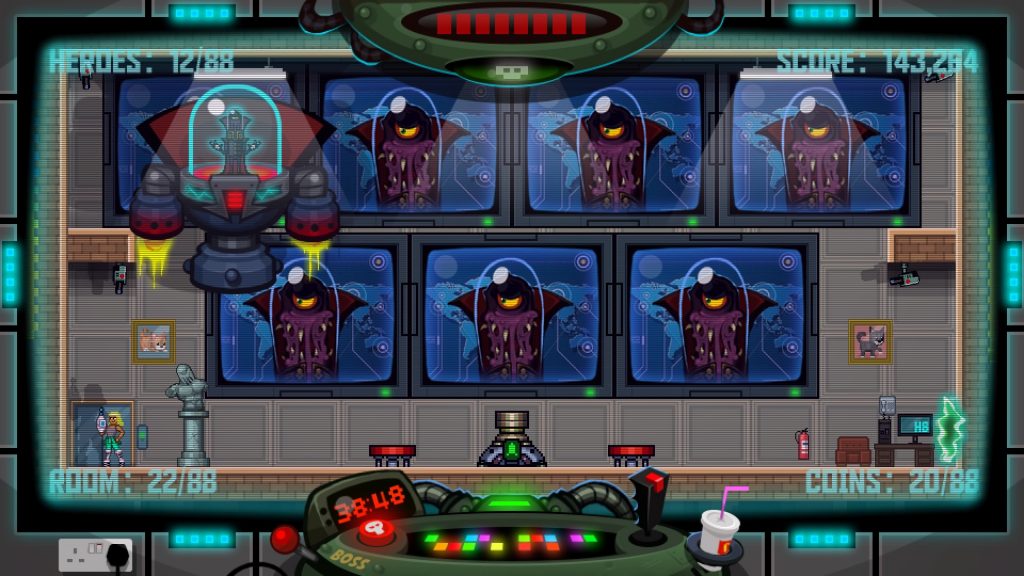 While the game employs a retro aesthetic, it’s not the typical 8-bit sort of look that we’re so used to. There’s more detail and the animation is better so it’s more retro-flavoured but better than what you may have been able to produce on a SNES or Megadrive.

What’s interesting is that you are viewing the action on a big screen from Dr. H8’s perspective. Occasionally things are happening in the foreground which can be a little distracting (that’s the joke though) but we appreciate the attempts to liven things up. 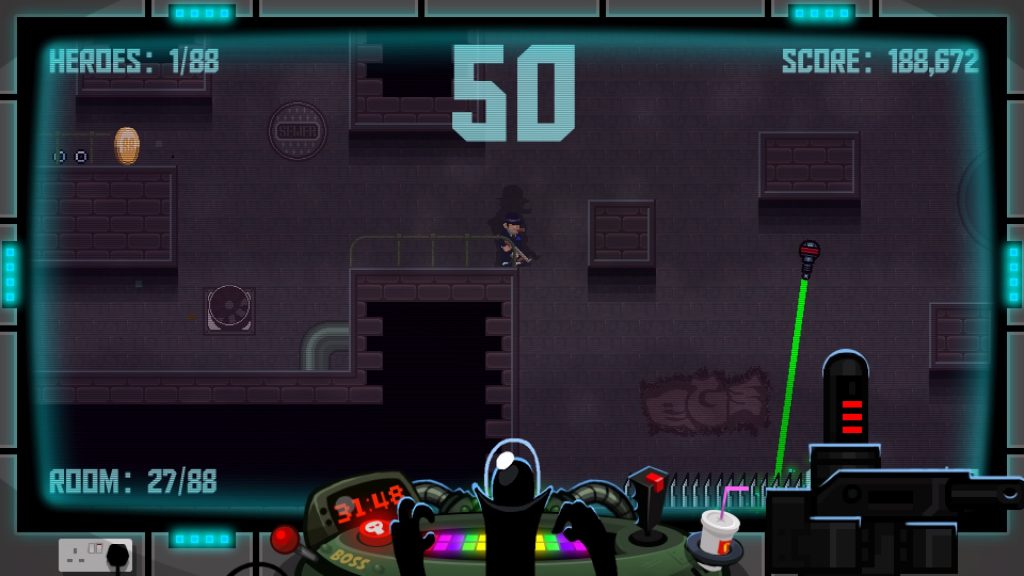 Humour is definitely the game’s strong suit and while the frustration of the cheap deaths and the fact that the 88 levels drag out a bit (especially as they only really have four overall themes), there’s a freshness to the game and a sheer sense of fun that carries it a long way and balances out some of the good will that would have been lost along the way.

Anyway, aren’t all platformers a bit frustrating these days?

88 Heroes
7 Overall
Pros
+ Good twist on the usual indie platformer concept
+ The game maintains a decent sense of humour throughout
+ Detailed retro graphics
+ Chaotic Wario Ware feel
Cons
- Drags on a bit
- Full of cheap deaths
- Some heroes are a bit too useless
Summary
88 Heroes makes a great first impression with its old-school platforming game mechanics and sense of humour. Ultimately, the gameplay and the jokes wear a little thin but this is still well worth checking out.